In Dearest, I wanted to really challenge myself. I worked hard to infuse the entire piece in a simplicity that is not often my modus operandi. I worried that the piece would be boring, and that I would have trouble retaining the audience’s attention. What I found, however, was that with only a few layers for the audience to decipher and by maintaining an intent focus on what I was doing as the performer (drawing), I created a piece that was meditative and intimate, a piece that welcomed audience members into the private, vulnerable space of my studio and my journal. As I drew images culled from months of researching nuclear war and testing, nuclear power, and the effects of nuclear radiation, seven letters were read aloud by audience members. When a letter was finished, I would interrupt my drawing-space to go seek out another person to read the next one. The seven letters were to each of my parents, two lovers, my best friend, a politician, and a political prisoner. The content of the letters was also informed by my research, but in addition, they were instilled with personal stories from my journal, responses to recent news reports (from the disaster in Fukushima to the uprisings in Egypt, Tunisia, London, Madrid, and elsewhere), and anecdotes about the specific relationship of myself to the receiver. A narrative began to emerge from the letters and the drawings that detailed my own struggle to find hope in a world so fraught with destruction. 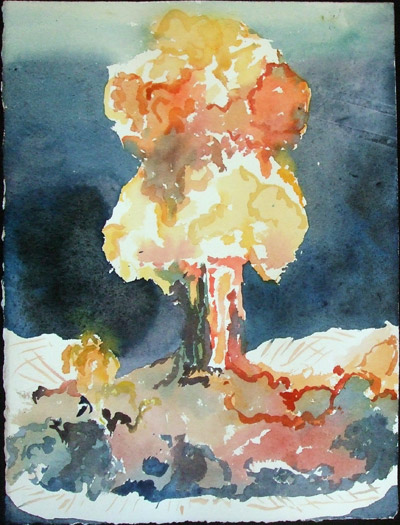